Hello friends!!!
Its Neha here again with a new monthly challenge for you all. Summers are at peak now and its getting very hot here in North India. Scorching sun, heat waves all are making it just impossible to step out of home. This calls for a summer splash theme this fortnight as a bit of relief (lolz).

1. Emphasis on Summer splash- You can either go for a beach theme ( anything related to beaches) or nautical (related to sea, navigation in the sea, sailors or maritime. You can choose elements like anchors, lifebuoys, ships, lighthouse etc.)
2. Anything goes- you can make card, layout, canvas, mini album, 3 D project etc. as long as its related to the theme
3. You have until 30th June 2015 11:55 IST to submit your entries.

Winner for this month challenge will get a gift bag from Lulupu store.


And now comes my project for this month's challenge, I decided to go with a nautical theme so I made a lighthouse. I have a small tutorial for you as well. I am very happy the way it turned out finally. I made it from scratch using chipboard, then covered it with a very light shade blue pp. Then spritzed some handmade sprays and LSG sprays. Used gesso, Texture paste and white sand resin with stencils to add some texture. The top part was made using a sturdy CS and windows were cut using a die from spellbinders. It also has space for a LED candle. I also used stickles glitter glue and liquid pearls at some places
** Also note that the back section of the top part opens up so that LED candle can be switched on/ off. The door and windows were hand cut. Used a resin frame over the window and wood veneer bird was placed there. Over the front window I used a metallic corner. Roof was also made using a CS and I had put a umbrella charm in its center. The base was made using a circular piece of chipboard. gessoed it and covered it with moss and some beads. A hand drawn and hand cut lamp-post was also placed along the lighthouse. Finally spread some sea- shells here and there randomly. And it was done.
Some more pics. It looks much more bright, shimmery and beautiful in real than in pics. 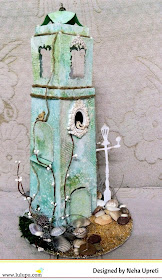 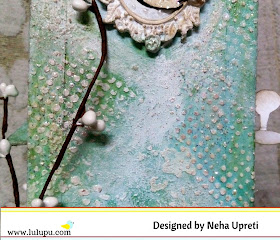 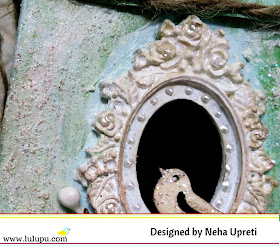 Just have a look at the texture! 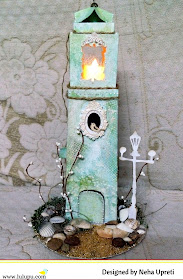 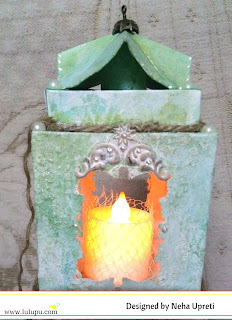 With LED candle switched on

Here is the step by step tutorial for it:
1.Take four chipboard pieces. you can decide the length and width as per you choice, But they all should be of same size. 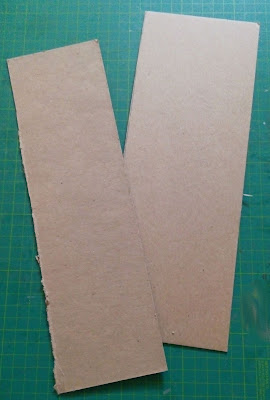 2. Trim all the chipboard pieces so that its width is slightly lesser on one side. As the light house is narrower on upper portion. 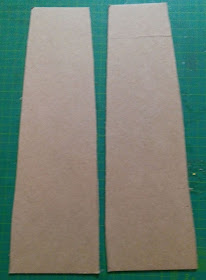 3. Covered all the pieces with PP. I chose a light blue PP with small white polka dots. 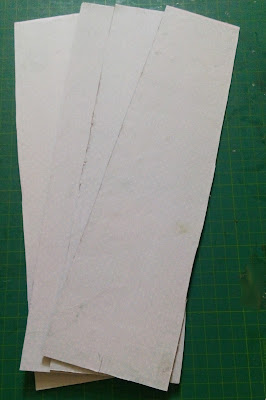 4. Next on one chipboard piece cutout a door and on another one an oval window. Keep the door cut out, as it will be used here only. 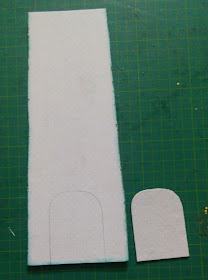 5. Now comes the steps to assemble all the chipboard pieces together to make the lower body of the light house. For this cut 1" strips of a sturdy CS and score them at 1/2". These strips will be used to attach the pieces.

7. Now comes the fun part. Spritz sprays in your choice of color. I used a homemade spray in teal color and LSG spray in green color.
8. Take a resin frame and a metal corner and cover them with gesso and distress them with vintage photo DI. Glue this resin frame over the window. 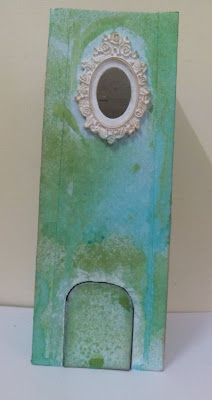 9. Now comes the top part which includes a box and a window kind of thing. For box part take a square CS and score it 1/2 " on all sides. Make cuts as shown in the pic and fold at all scored lines glue the flaps inwards. It should fit on top of the lighthouse body like a cap. So keep this in mind while deciding its measurements. 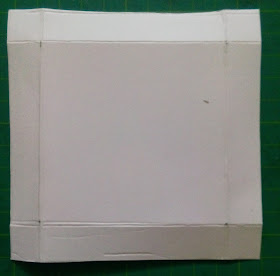 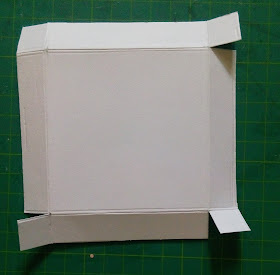 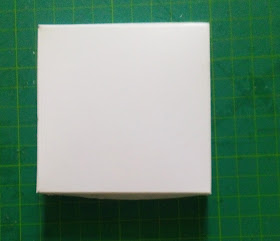 For making window section take a strip of CS and score it at equal intervals. the width should be a little less than the box. Also score it at 1" on top and bottom. Cut at each score line.

Cut out windows using die of your choice. Join the two ends together and its done. I have kept the back part of window open so the LED candle can be switched on/off.

10. Next comes roof, I was pretty confused in the beginning as how should I do it. It also has two parts; a box and a roof. Make a box as above but of smaller measurements than the window part.

For roof take a piece of CS and score it diagonally on both sides and at both the centers too (I forgot to click pics for this part). Fold on all the score lines. Take a point 1/2" above on one center score line and join it on both the corners. Cut out this part. Do this on the opposite side too. Now fold it on the score lines and  its ready. Now I was stuck again as how to put it, as it must have a raised center. I had cap of a used fevicol bottle. I gessoed it and colored it. glued it in the center of the box. Then placed the roof over it and glued its corners on the box. Finished with some pearls and a twine.
Wrapped  LED candle with vegetable netting and put it inside. These all parts were colored with sprays, gessoed, stenciled with texture paste and white sand.
11. For base take a circular piece of chipboard and gessoed it. Glue some moss and for making sand part add some beads of same color.  I also used some Prima glass glitter. Add some pollen siciks some netting and sea shells
And its done!!!!
I hope you like it!!! I would love to see you all participate in this month's challenge!!
Hugs!!!
Neha

Thank you for your comments and feedback.